We’ve all heard of the Princess Pat, and most of us know that she didn’t really live in a tree.  But who was she?

Born in 1886, Princess Victoria Patricia Helena Elizabeth of Connaught was a granddaughter of Queen Victoria. Her parents were Prince Arthur William Patrick Albert, the Duke of Connaught and Strathearn, and Princess Louise Margaret of Prussia. After a lengthy career in the army, the duke served as Governor General of Canada from 1911 to 1916. Because her mother was in poor health (she passed away in 1917), Patricia served as her father’s official hostess in Canada. Patricia was very popular and highly respected for her work for the Red Cross.  She was appointed Colonel-in-Chief of the newly formed Canadian Light Infantry in 1918 and personally embroidered the regiment’s first official colors — their flag. Colonel-in-Chief is a ceremonial role, similar to a sponsor or patron.

Princess Patricia and the Duke of Connaught at the Winnipeg Expo in 1912 (http://dukeofconnaught.yolasite.com/).

The Princess Patricia Canadian Light Infantry was formed in August 1914, at the outbreak of World War I, and will celebrate its centennial next month.  Members are affectionately known as the “Princess Pats” or the “Patricias,” and their annual magazine is The Patrician. It is a highly decorated unit that served with distinction in both World Wars, Korea, Cyprus, the Balkans, and Afghanistan.

The popular “Princess Pat” camp song is said to be a variation on the regiment’s own marching song, with lyrics that have become increasingly garbled over time. Like a game of telephone, the phrase “light infantry” has transformed into “lived in a tree.” The word “rigabamboo” (or rickabamboo) refers to the red, gold, and purple regimental flag and is “Ric-A-Dam-D00” in the original. 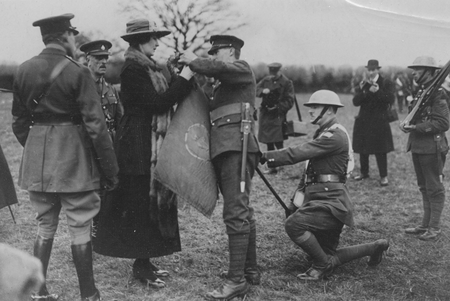 Princess Patricia presents a wreath to the troops (www.birthofaregiment.com).

I’ve come up with at least three versions: the Scout Tree song, the Scout Light Infantry version, and the Regimental lyrics.  Although I could not find a definitive statement, the regiment supposedly has asked that the song not be sung with the irregular lyrics as they regard it as disrespectful.

In addition to her needlework talent, Princess Pat was an accomplished painter whose work was widely exhibited. She married Alexander Ramsay, a Naval officer who worked for her father in Canada, in 1919. Now known as Lady Ramsay, Patricia traveled the world with her husband as he rose to the rank of admiral. They had one son. Lady Ramsay passed away in 1974, but Princess Pat lives on in hundreds of Girl Scout, Boy Scout, and Girl Guide camps around the world.

7 thoughts on “Princess Pat Out of Her Tree”