The Archives exhibit used the same theme. (We were not involved in the award histories read during the meeting.)

The exhibit area was crowded, but here’s a wide view of our corner: 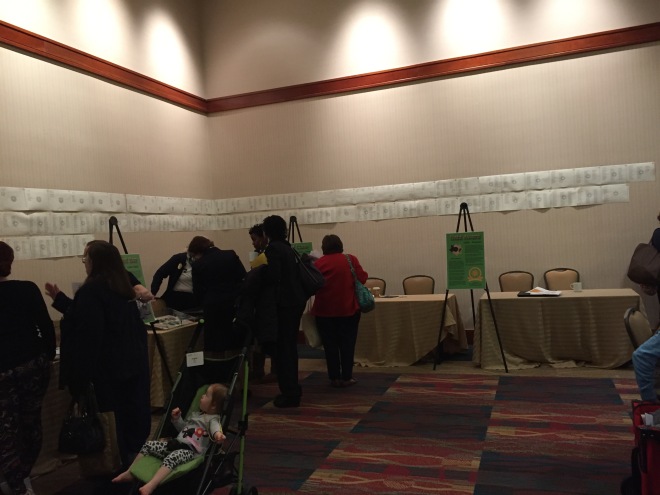 Our display had two main parts:

Second, we tried construct a timeline with ALL the women from Nation’s Capital and its legacy councils who received these awards over the years.  This is definitely a work in progress, as our records are spotty, especially for the Curved Bar and First Class years. (Please email me to add names to the list: ann@robertsonwriting.com.)

Many women took photos of their name or their daughter’s. Former troop leaders searched for all of their girls, too.

We also had small award stickers for name tags. I earned my Gold in Kentuckiana (1983), so I wasn’t on the wall, but this way I could still display my Gold. Susan Ducey, another Committee member, received her First Class in Illinois. (At the end of the meeting, staff passed out the centennial pins to past recipients.) 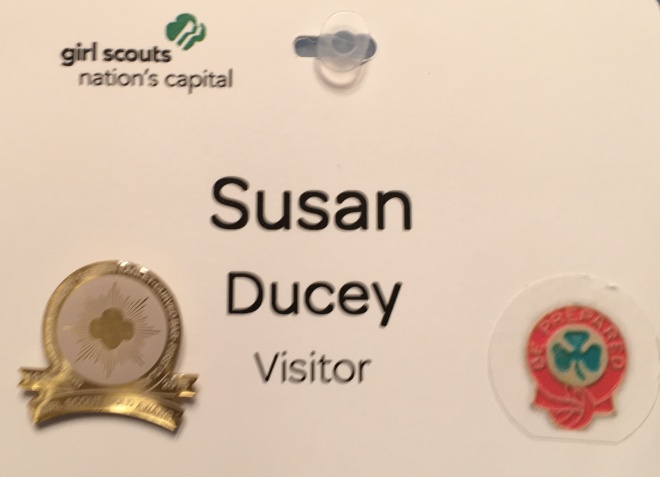 I enjoyed meeting so many of our Golden Girls at the annual meeting. Decades later, they are still as proud as ever of their accomplishment, and many vividly recalled their award ceremonies. 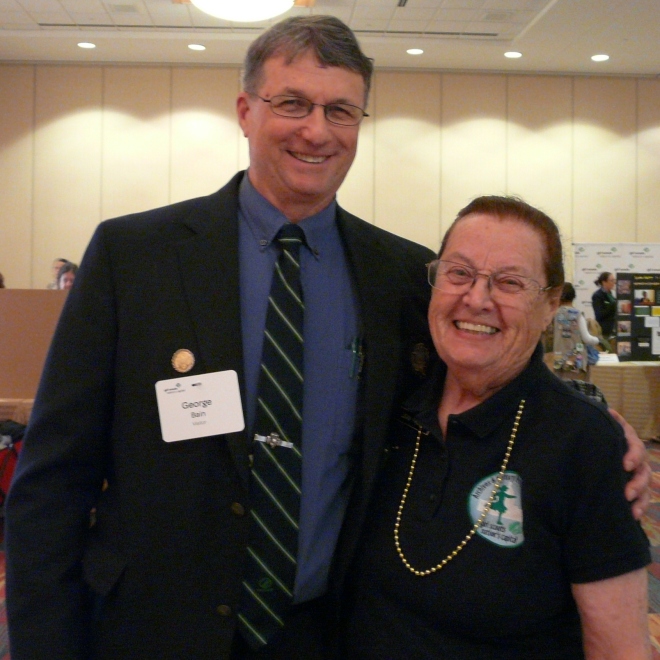 George Bain claimed to have earned the Gold Award, but Joan Paull straightened him out. (It was your troop, George!)

The award posters and more are on display at the GSCNC Main Office, 4301 Connecticut Ave. NW in Washington, DC. Be sure to take a look when you pick up those end of the year purchases.

Last Saturday I was a guest of honor at the 27th annual Antietam National Battlefield Memorial Illumination.

For the past 27 years, the first Saturday in December is a huge event at the National Park in Sharpsburg, Maryland, about an hour’s drive from my house. 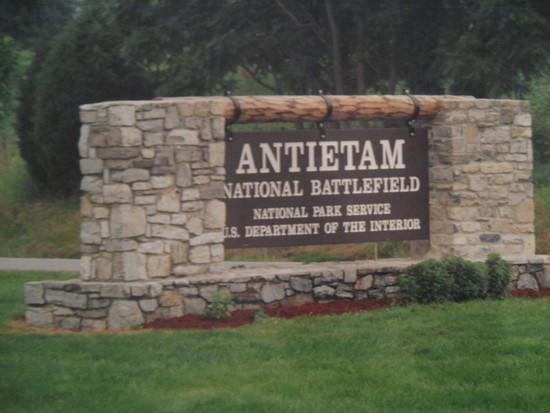 Girl Scouts, Boy Scouts, and other volunteers spent all day installing 23,110 luminaries (candles in paper bags full of sand) to commemorate the 23,110 soldiers killed, wounded, or reported missing in the Battle of Antietam on September 17, 1862.

The ceremony started promptly at 3:45 pm and featured distinguished speakers, a bagpiper, a color guard from the Army’s Old Guard unit, a choir, vocal soloists, and a bugle choir.

I was seated with Congressman John Delaney, former Congressman Roscoe G. Bartlett, Jr., and the wonderful Georgene Charles, founder and organizer of the Illumination.

I was particularly moved by Bartlett’s comments. He emphasized that all soldiers are remembered equally at the Illumination. Casualties are not broken into Union versus Confederacy, but rather have been united by their sacrifice. Noting the country’s current toxic political atmosphere, he held up the unifying aspects of the Illumination ceremony as a model for today’s leaders.

I had been asked to speak about the Girl Scouts and the Civil War. Since the movement began nearly a half-century later, I anticipated a very short presentation. But as I researched the topic, one very clear connection emerged. 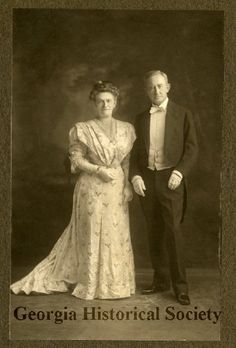 Juliette Gordon Low was born on October 31, 1860; the Civil War began in April 1861. Her father immediately volunteered and left Savannah. Meanwhile her mother faced the added burden of being a Chicagoan living in the deep south. Her husband, brothers, and uncle were fighting on opposite sides, and her neighbors questioned her loyalty.

Daisy did not see her father again until she was three. She grew up knowing the hardships, stress, and anguish that affects a family when the father goes off to war. She also understood the heavy burden that falls on women at war, both mentally and physically.

That, I think is the connection between the Girl Scouts and the Civil War. The movement was only a few years old when the United States entered World War I, but Daisy knew immediately what role her girls could play. She made sure that Girl Scouts had the cooking, homemaking, and first aid skills that would allow them to keep the home fires burning, as men went to war and women went into the fields and factories. She dispatched her girls to ease the burden and worries of mothers and wives.

Back at the Antietam Battlefield, the sun was beginning to set and  the distinguished guests lit the first luminaries. (I almost lit a few bags instead of candles, it was harder than you’d imagine!) 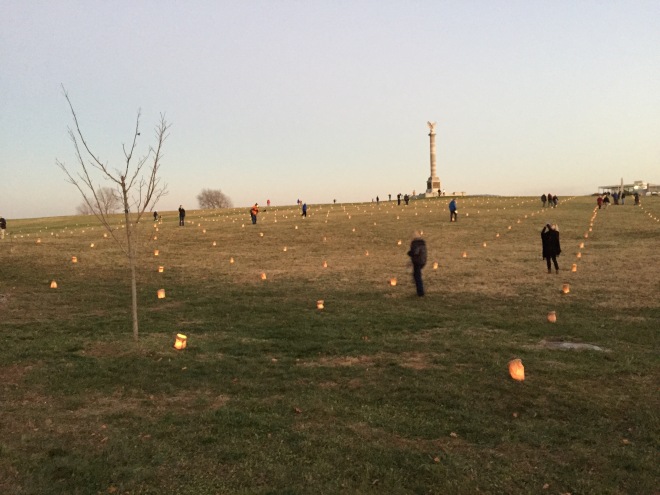 Slowly, volunteers lit the luminaries across the battlefield. As the sky darkened, the candles began to flicker brighter, until the entire park was aglow.

The ceremony ended with a 21 Gun Salute from The Old Guard and bugles sounding an echo version of Taps.  Everyone returned to their cars and joined a slow procession through the park. 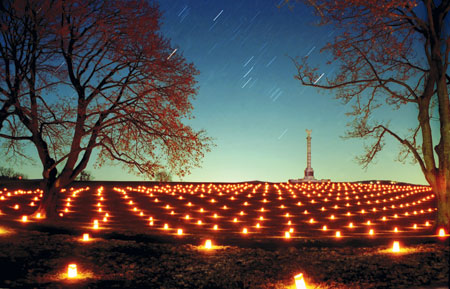 Photo from Hagerstown Magazine (better than any I took!)

Girl Scouts have been a part of this tradition since its inception. I think Juliette Gordon Low would agree that it is an excellent form of citizenship training. The scope of the conflict becomes much more tangible through the luminary installation rather than a paragraph in a textbook.

Fall is an exciting time for Girl Scouts, as new girls join, new troops form, and returning members recommit themselves to the Girl Scout Promise and Law. Each is marked by a special ceremony, either an Investiture or a Rededication.

Both are beautiful rituals that have been performed since the earliest troops met.

But too often, once the ceremony ends, mothers rush over to the leaders and immediately begin arguing. The issue? The dreaded Rededication Rocker – the iron-on patch reading “First Year,” “Second, Year,” etc.

“Susie’s been in your troop three years, but you gave her a Second Year rocker. Can’t you get your paperwork right?”

And so it begins.

First, Rededication Patches and Rockers are not official insignia, like the Girl Scout pin, Council ID Strip, or even the troop numerals. They fall into the same category as cookie patches and event participation patches and go on the back of the uniform sash or vest. 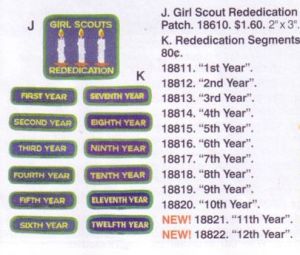 When Daisies expanded to Kindergarten, new 11th and 12th year rockers were added to the 2004 catalog.

Second, Rededication Patches and Rockers are optional. The uniform police aren’t going to come after you if your troop decides to skip them. And even if you do pass them out, Ambassadors really don’t need a huge row going back to their birth. Personally, I don’t think it’s a wise use of resources; a dozen rockers take up a lot of acreage on a teen vest, and at $1.75 each, I don’t think a troop should spend funds on patches “earned” six or seven years ago. If it’s that important, parents can buy the whole series. 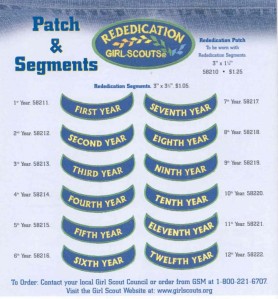 Third, because they are not official insignia, Rededication Patches and Rockers do not have requirements to earn them. If a girl commits to another of Girl Scouts by reregistering, that’s sufficient for me. If she can’t make the rededication meeting, but comes later and asks, I’ll give her one. I’m just happy to have her back for another year.

Fourth, Rededication Years are one less than membership years. This is my biggest complaint about Rededication Rockers, the annual debate over what year a girl should receive. When you join Girl Scouts, you are invested; when you re-up for another year, you rededicate. Your second year as a Girl Scout is the first time you have a Rededication Ceremony; therefore, it is year one.

Wrong!! There is no Year 13 Rocker. Now do you believe me?

There is way too much drama about who gets what scrap of fabric at a Rededication Ceremony. Let’s keep the attention on the real meaning of Rededication. She came back!!!! Isn’t that enough reason to celebrate? 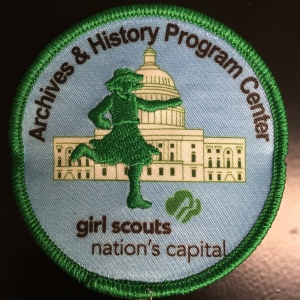 Every visitor receives a Center patch.

We had guests from the Heart of Pennsylvania and Central Maryland Archives Committees, county and state political leaders, and over 100 members of Nation’s Capital.

For those of you who couldn’t make it, here is a virtual tour of the facility. 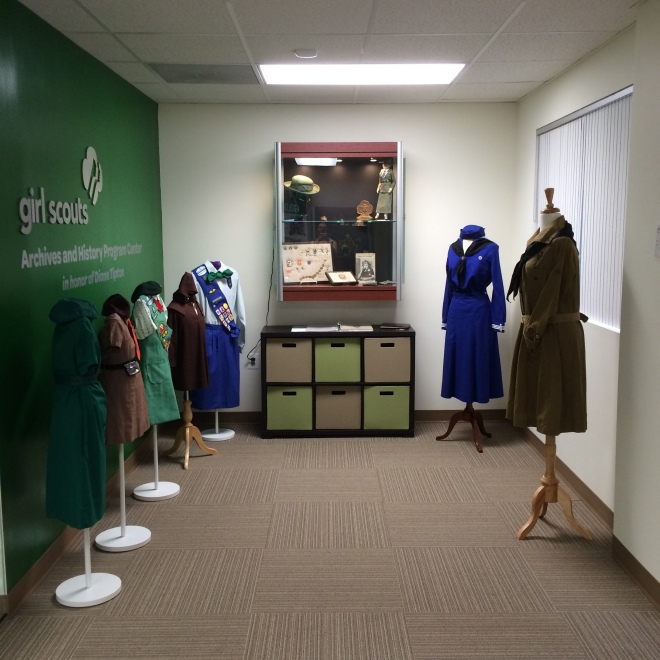 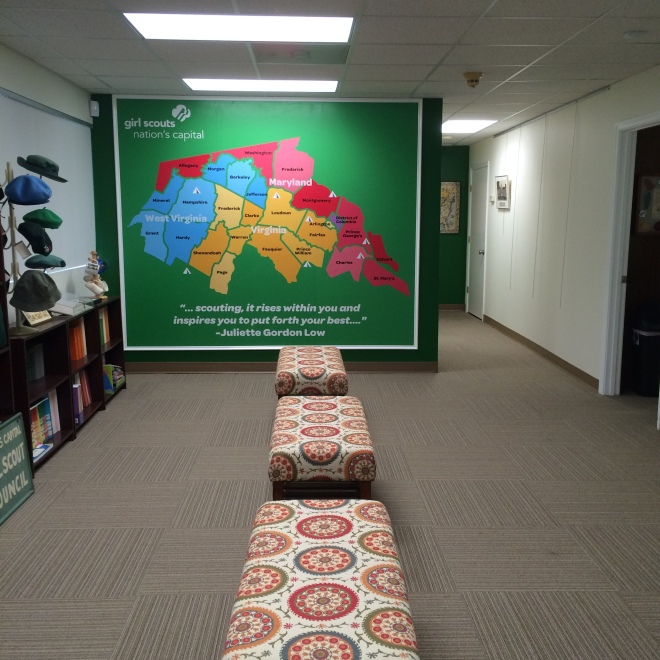 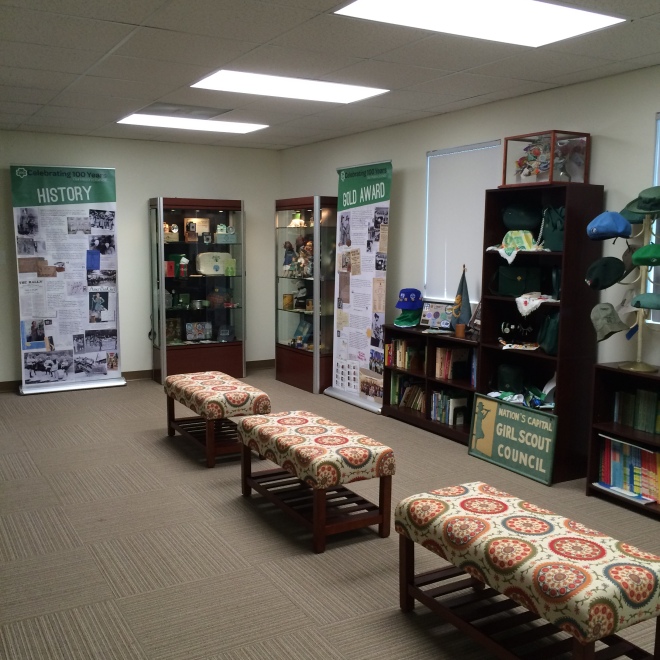 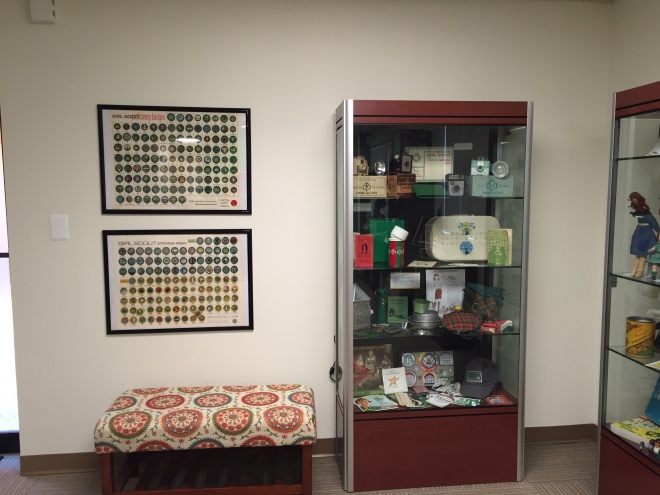 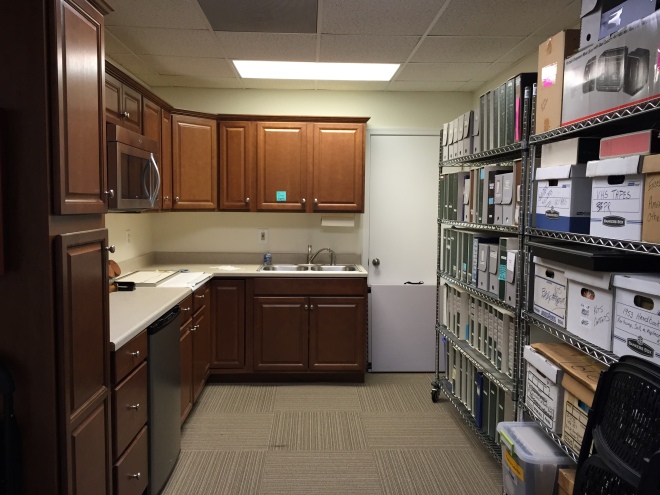 Publication storage and workroom. The Center previously was a field office. 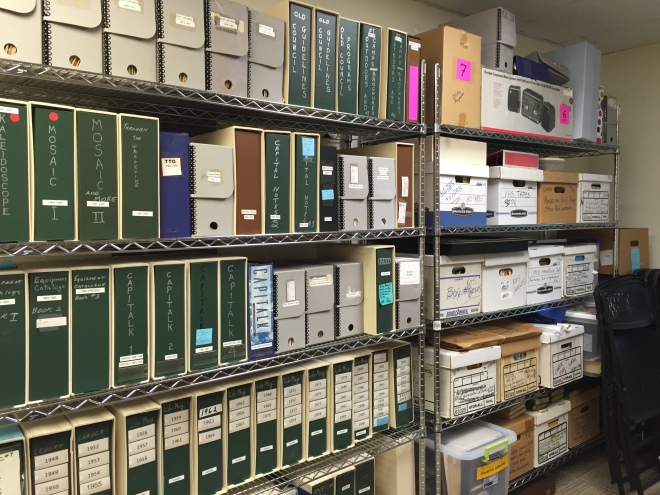 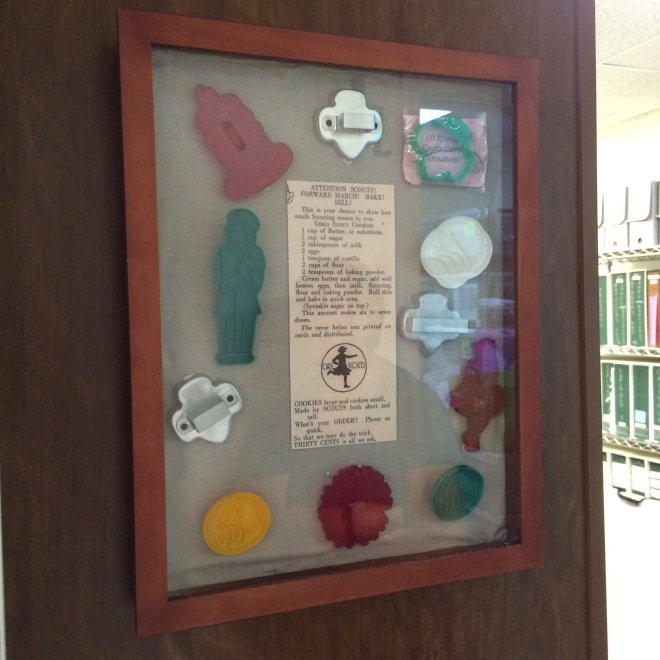 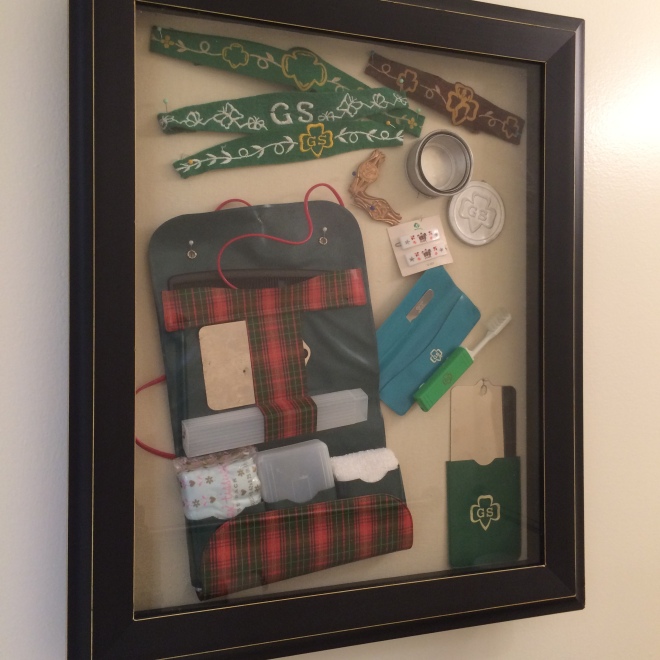 There’s even a display in the restroom. 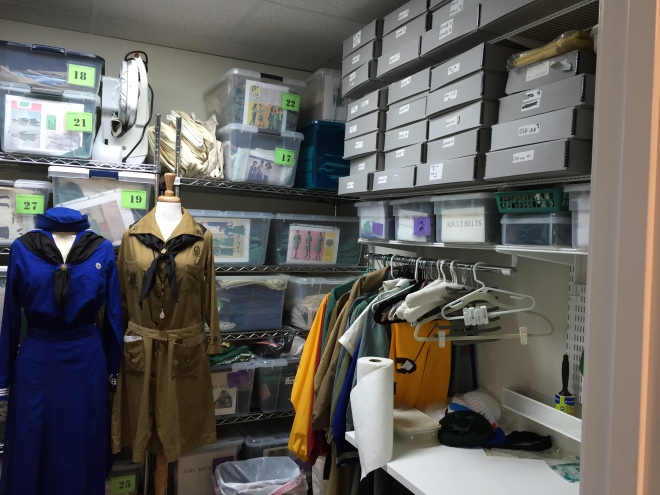 The uniform room is compact, but includes storage, a desk, and an iron and ironing board behind the door. 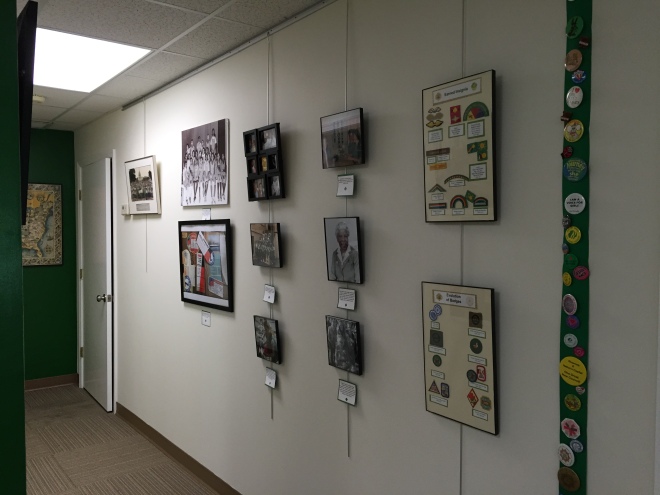 A wall-track hanging system allows us to rotate pictures and displays. 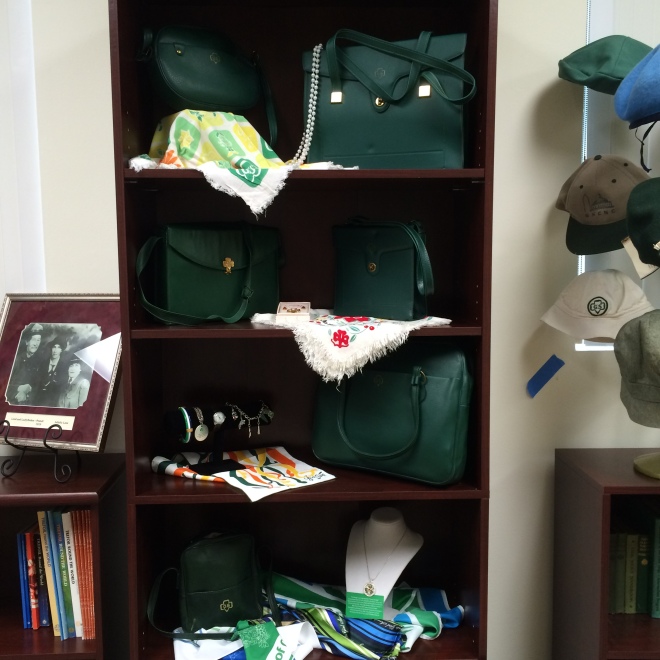 The purse display is extremely popular.

Diane Tipton was president of the council from 2008 to 2014 and is a devoted friend of the archives. We thank her for making this Center a reality! 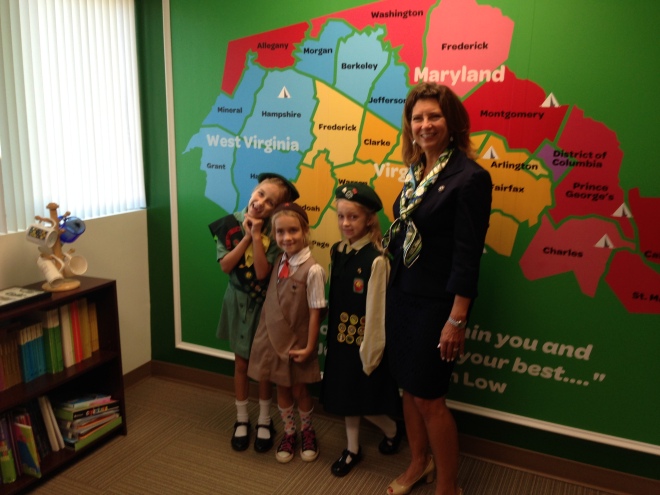 Former council president Diane Tipton with some of the day’s uniform models. 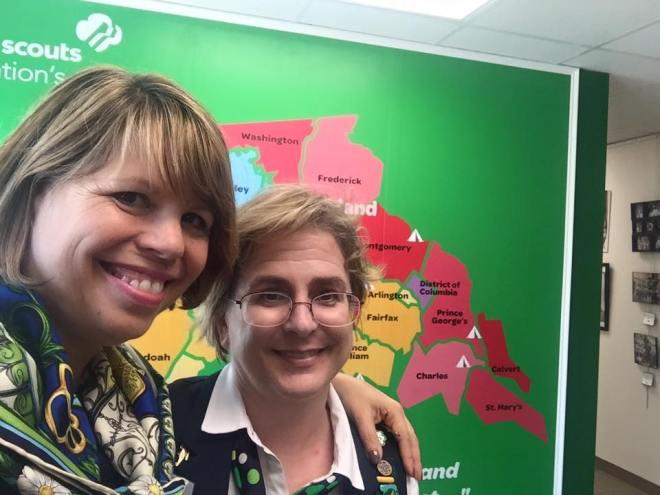 Nation’s Capital CEO Lidia Soto-Harmon and I after the dedication. 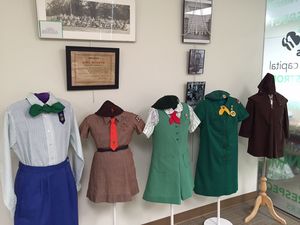 When Fran Randall joined the Girl Scouts in 1938, she wore a long green dress with long sleeves, a belt and an ace scarf. 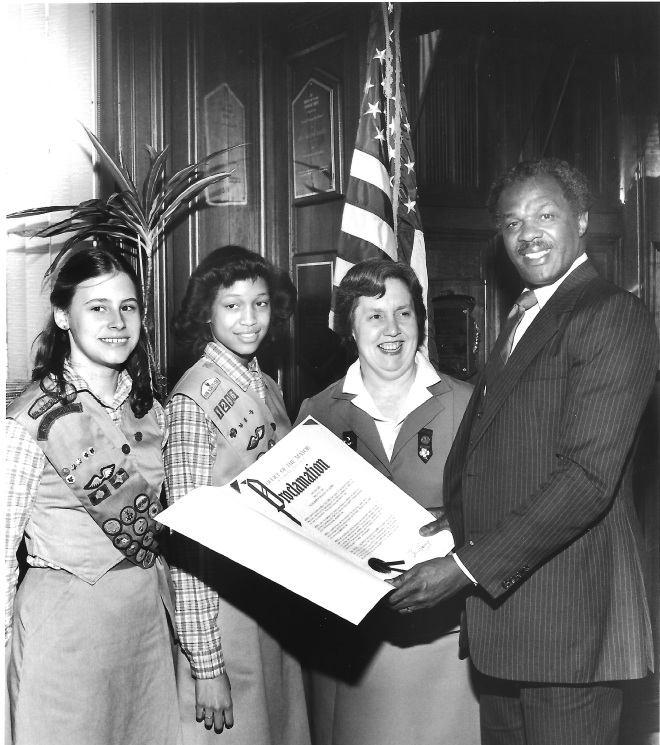 Barry saluted the Girl Scouts on the occasion of their 70th anniversary and called upon citizens to join with the Girl Scouts of the Nation’s Capital to “improve the quality of life for all.” 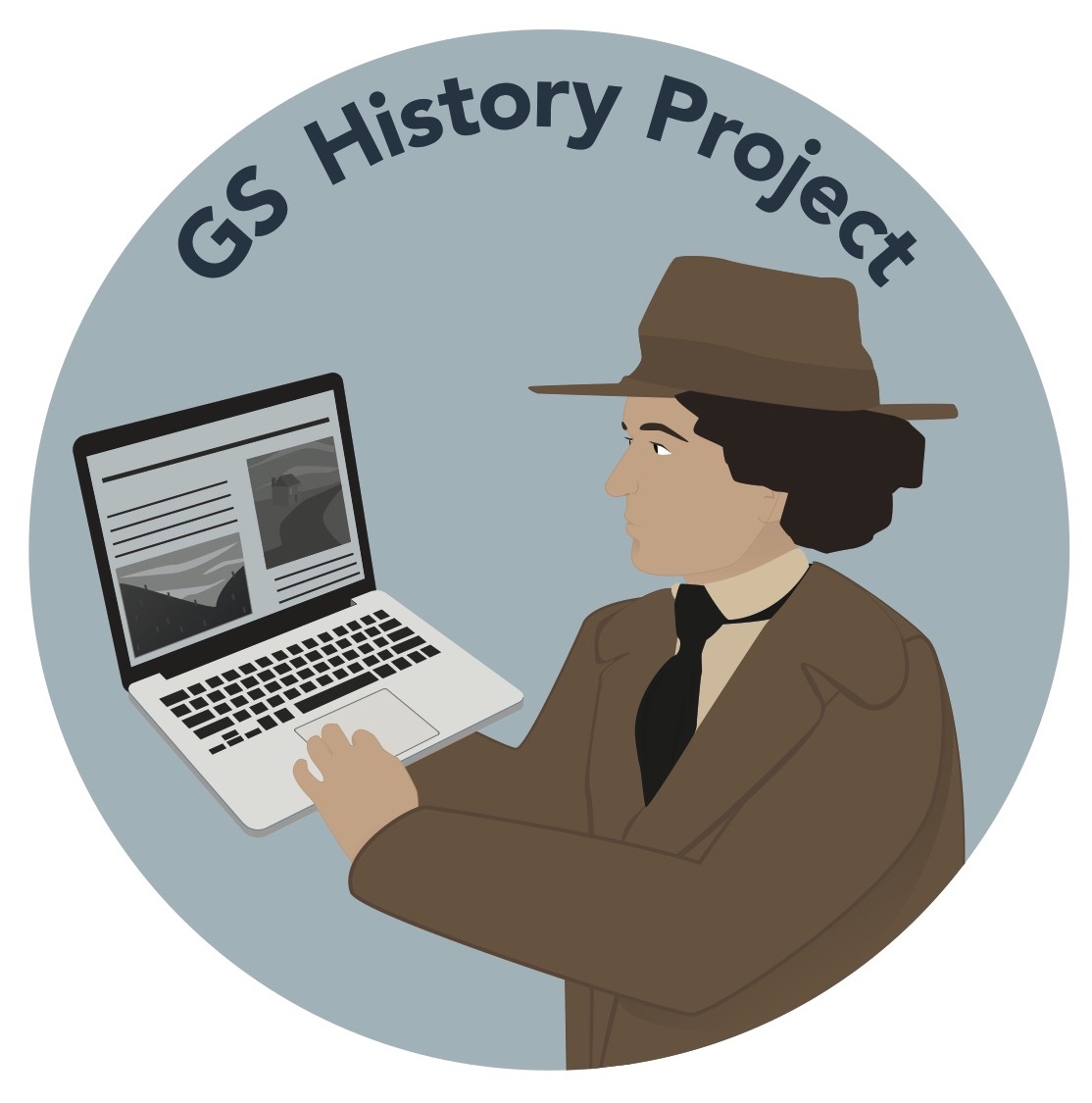 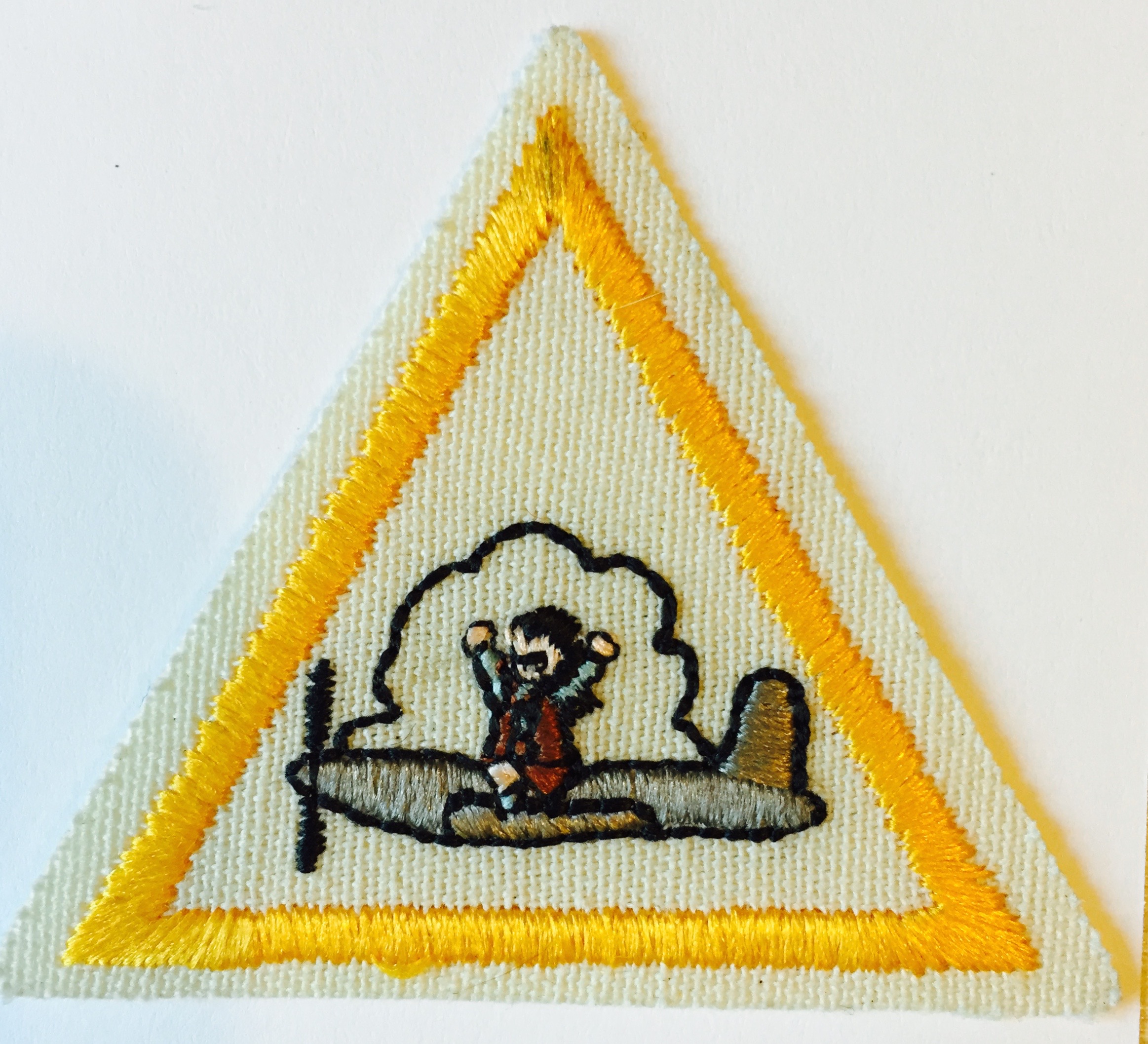 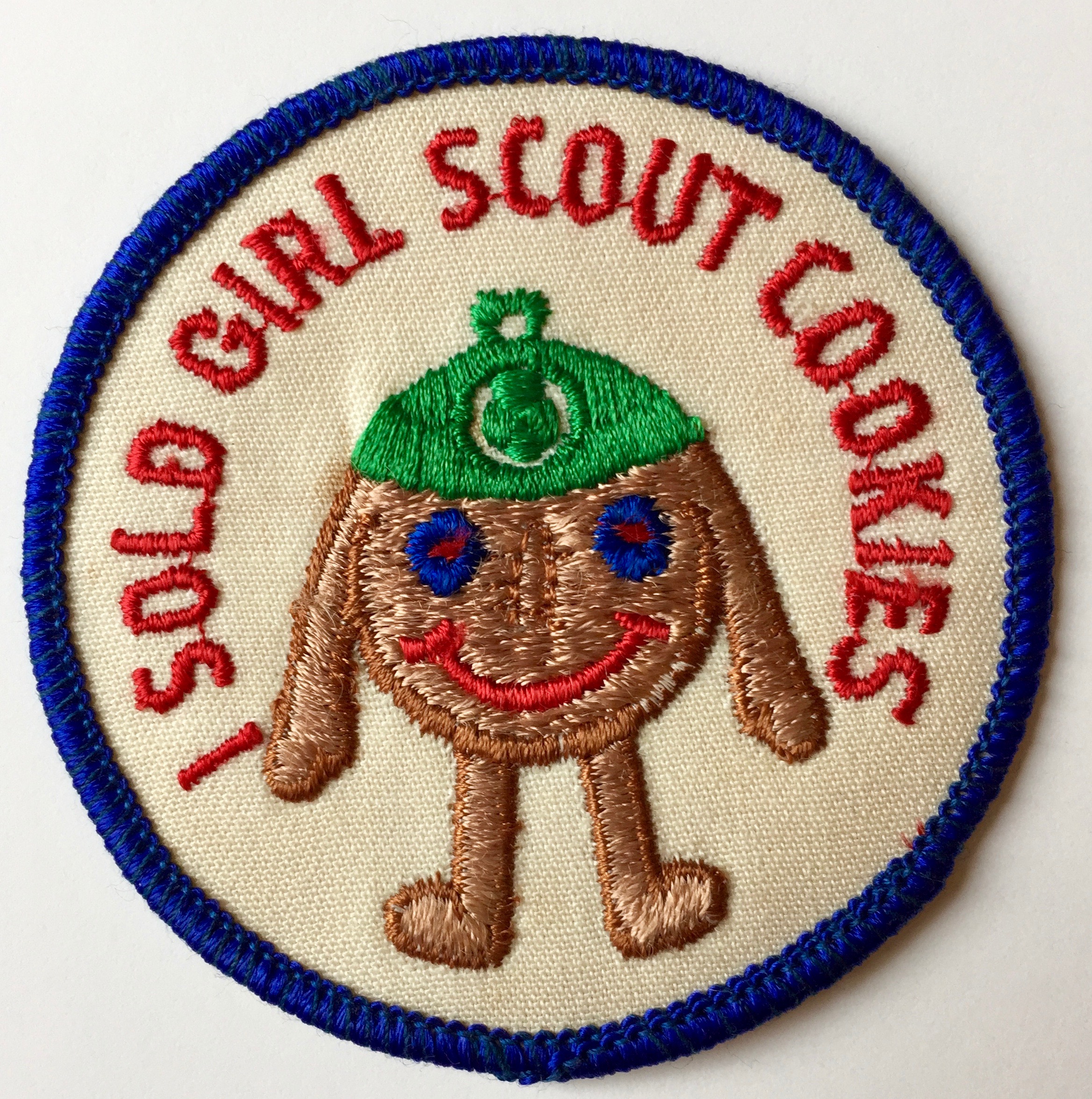 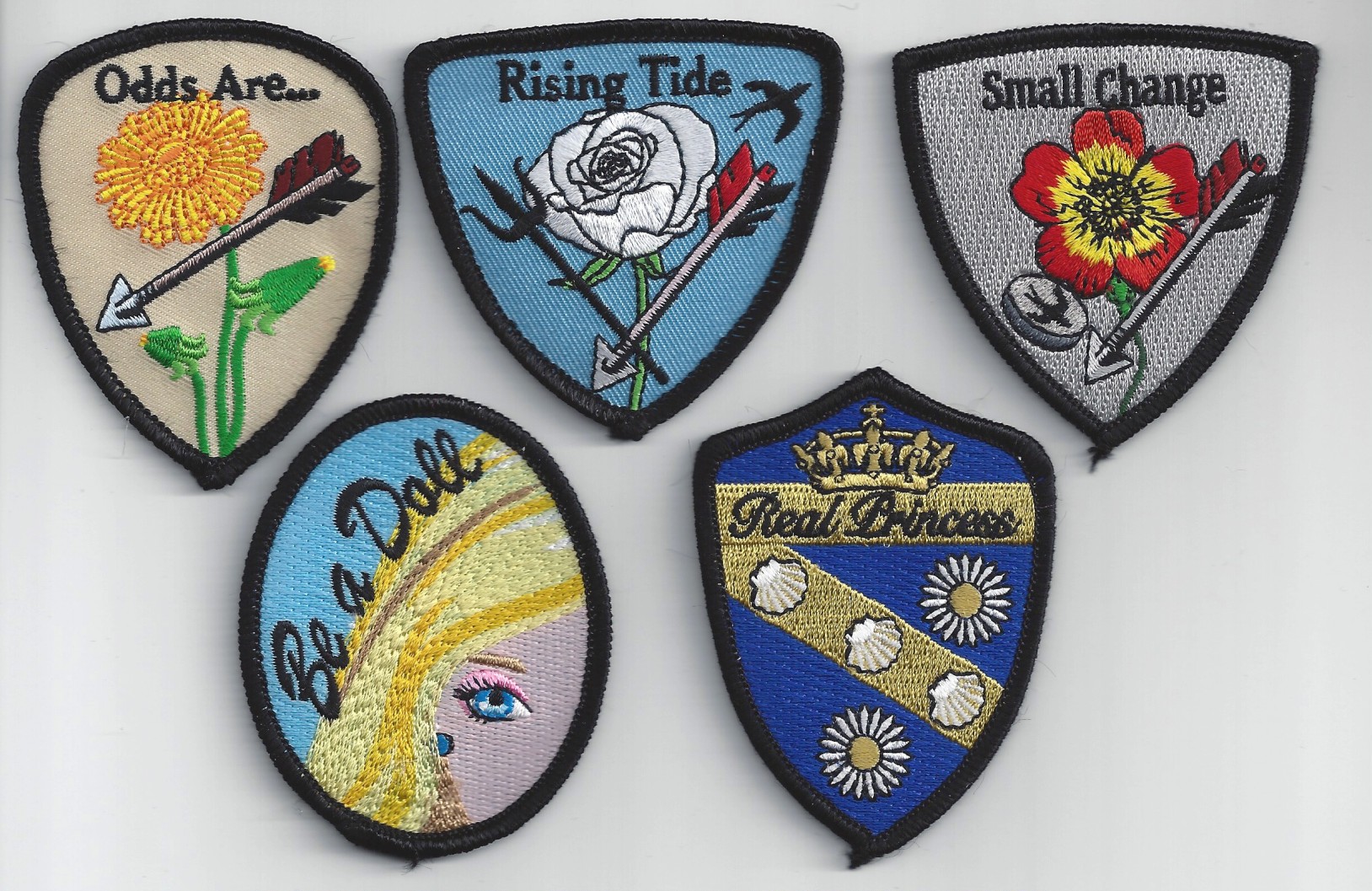